Daycare vs. Preschool: Is One Better Than The Other?

Seeme & Liz > Parenting Tips (0-2 year olds) > Daycare vs. Preschool: Is One Better Than The Other? 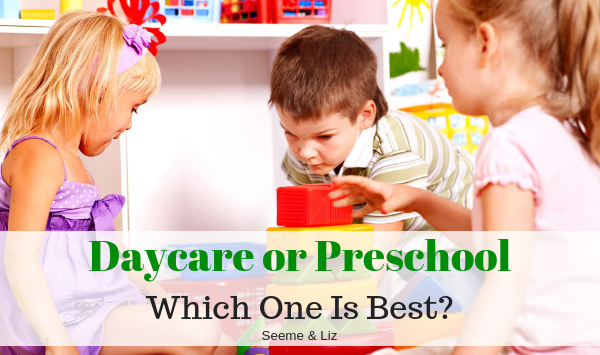 You may be asking yourself: daycare vs. preschool, which one will be best for my child?

Unfortunately, there isn’t really one answer to this question.

It will come down to why you are sending your child to either preschool or daycare.

Most parents who are looking at daycare options are doing so out of necessity – most likely because they are working and need someone to watch their child.

Let’s take a look at each option:

What is a Daycare Center?

A daycare center is place where parents can drop their children off for an entire day.

In North America, daycare centers are typically regulated and they need to follow certain rules/regulations.

These regulations will very from state to state and province to province.

Daycare centers can be privately owned or they can be run by non-profit organizations such as the YMCA.

A daycare center is ideal for working parents because most typically have drop off times starting at 7am and pick up times up to 6pm (this is an average and will vary from center to center).

Meals/snacks are typically provided by the daycare center and is covered in the daily cost.

The cost to send your child to a daycare center will also vary depending on the type of center (private daycare centers tend to cost more than non-profit ones).

Some daycare centers have subsidy programs for those who cannot afford the rates.

Depending on where you live, daycare centers may receive government funding making them accessible to all families.

For example, in the province of Quebec (Canada) daycare programs are subsidized by the government and the rates are all quite standard with little variation.

Daycare centers typically accept children from as young as 6 weeks old until they go to school.

Some daycare centers are attached to schools and offer before and after school care as well.

An alternative to a traditional daycare center is a home based daycare (also known as home care or a day home).

This type of daycare is like the name implies, a daycare run out of someone’s home.

Not all home daycare programs are regulated, therefore anyone can open a home based daycare.

Many home based daycares will only have 4-6 children a day (this number can vary depending on the age of the children).

There are many great home based daycare providers around (some of which are run by former early childhood educators), but make sure to take a tour first as your child will be in someone else’s home.

Home based daycares also often will offer non-typical hours which is great for parents who work shifts!

What is a Preschool? 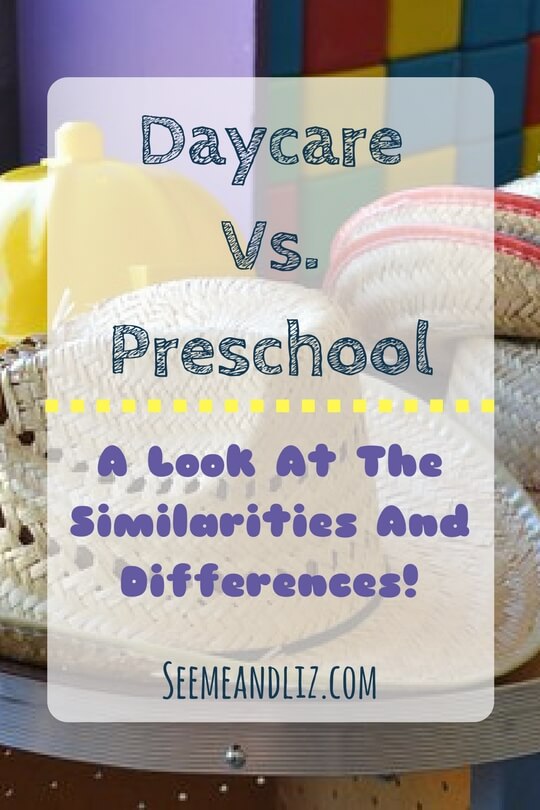 A preschool program is usually geared to children between the ages of 3 and 5.

The time a child spends in a preschool classroom is usually only a few hours a day, not necessarily every day of the week.

Preschool programs typically focus on getting a child ready for school.

They are often structured similarly to a Kindergarten class and include routine activities such as “circle time”.

Preschool can be a more costly option, however, some preschools are co-operative.

This means that while the fees are lower, parent involvement is higher.

There are parent committees that parents need to join.

A parent will volunteer anywhere from a few hours a month to a few hours a week in order to keep the cost of attending the preschool down.

Daycare vs. Preschool: Which Option Is The Best?

The answer to this really depends on what your needs are.

If you are looking for child care because you work, then a center based daycare or a home based daycare is probably the best option.

If you are not constrained to certain drop off and pick up times and are looking to get your child interacting with other children then both options can work.

The term “Preschool” makes one think that this type of program will prepare your child for school.

As a result, parents feel the need to look for programs that focus on academic skills such as reading and writing.

Many preschools and daycare centers market themselves as being the best to prepare your child for school readiness by promoting activities such as “letter of the day”.

I caution you to steer away from these programs and look for play based ones instead.

More and more studies are showing that early language skills are a good indicator of academic success later on.

Even the American Academy of Pediatrics is taking a stance on the importance of play during the preschool years!  You can read more about that here.

For example, if your child is 3 years old, it is more important that his language is developing appropriately rather than is his ability to recite the entire alphabet.

Learning language is so much more than vocabulary and grammar.

By becoming proficient in language skills a child is getting the foundation skills or building blocks that will lead to academic success later on.

Daycare vs Preschool: Play Based Wins!

Leave the academics until a child is in school.

From a developmental standpoint, the majority of preschoolers are not ready to tackle academic tasks.

Whether you choose to use a daycare center, a home based daycare or a preschool program, make sure that it is play based.

For more information regarding why play based learning is better for a child’s future success read the article The New Preschool Is Crushing Kids.

Always take a tour first with your child to make sure it is a good fit.

Look at the toys they have?  Do they allow for open ended learning?

Preschools and daycare centers that are theme based are also great!

This means they focus on a different theme every few weeks.

Theme based play allows children to categorize new words and ideas.  This will help with overall language learning.

Bottom Line: Daycare vs Preschool – The Choice Is Yours!

It really doesn’t matter if you choose to go the daycare route or the preschool route.

As long as your child has the opportunity to play and learn new language skills it will be great for overall development.

Remember that children have lots of time for academics, don’t push it during their early years.

Both of my children went to a daycare center.

My son started out at a home based daycare that was run by a former early childhood educator.  It was amazing!  However, they moved away so I switched him to the daycare center my daughter had attended.

When I decided to send my daughter to daycare it was not out of necessity.

I sent her because I wanted her to be around other children.

She also had issues separating from me so I wanted to start having her be away from me for a few hours before she had to attend school.  She was extremely shy.

We toured several preschools, daycare centers and home daycares before choosing one.

The one I felt offered the best play based program was actually a non-profit daycare run by the YMCA.

I loved the fact that they were open to children with special needs (not all daycares are unfortunately) so that my daughter could interact with children from all kinds of backgrounds.  It was a great experience for both of us!

What are your thoughts on daycare vs preschool?

Do you feel one is better than the other? 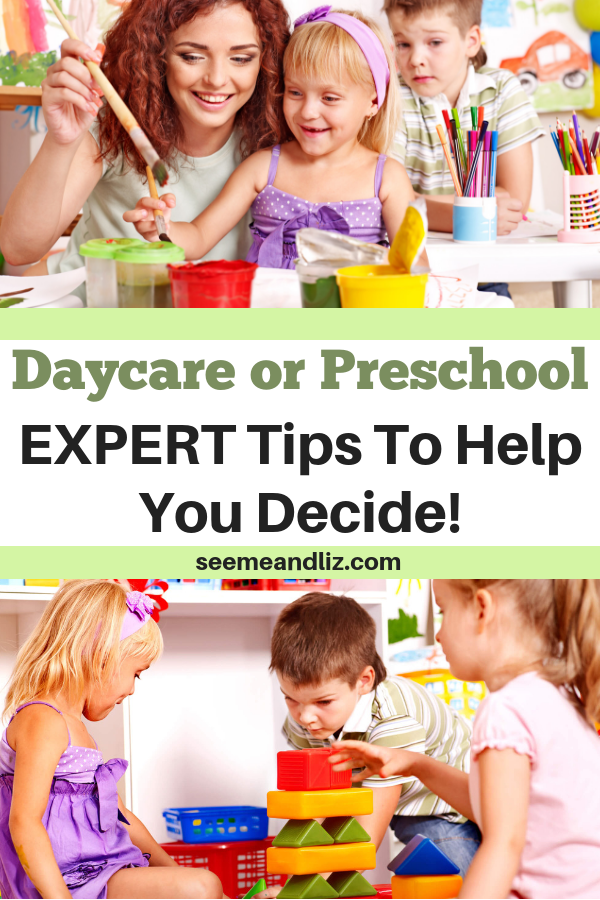 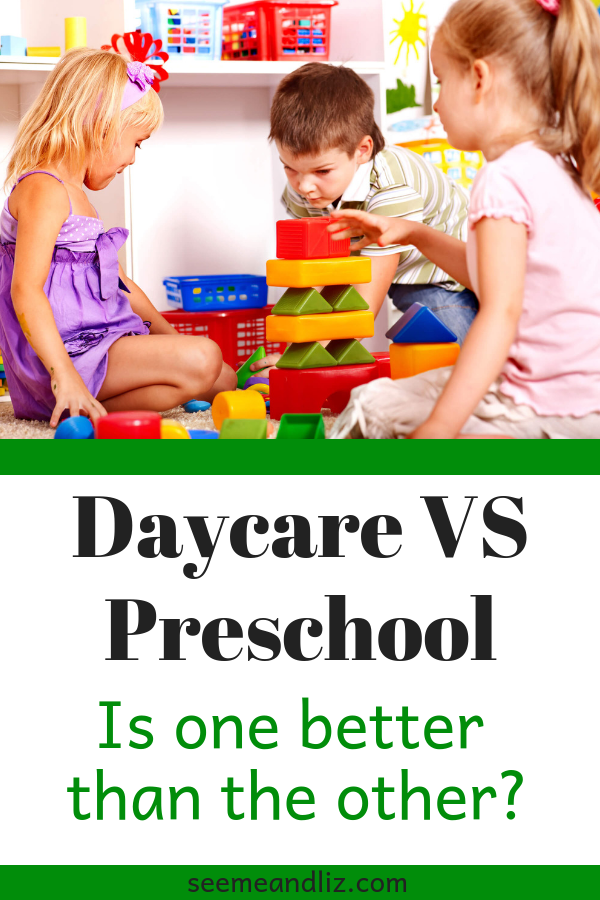 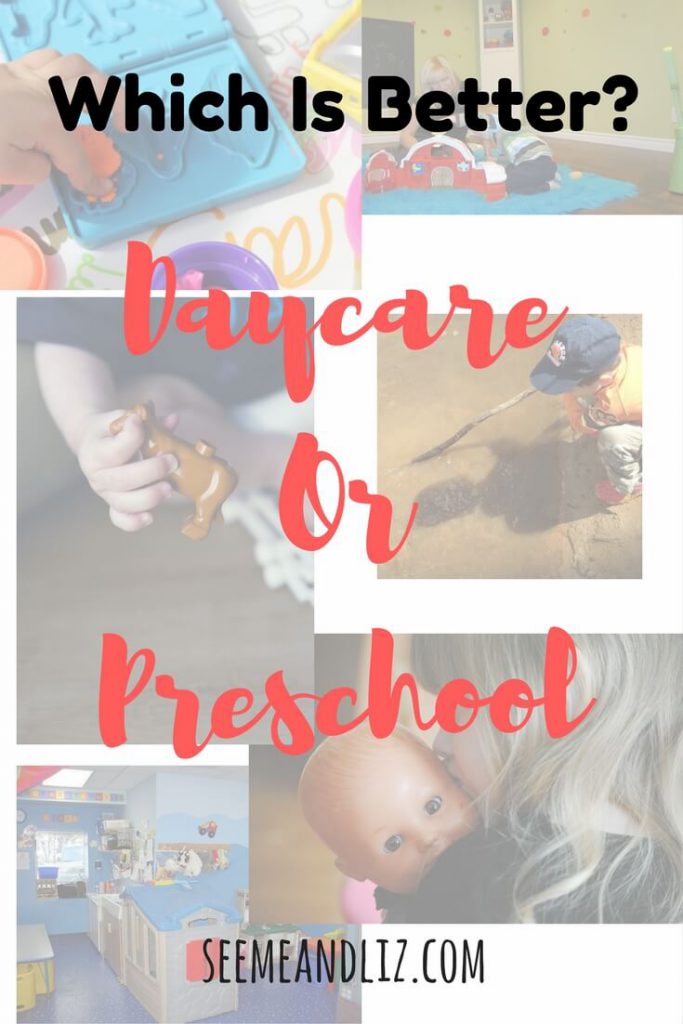