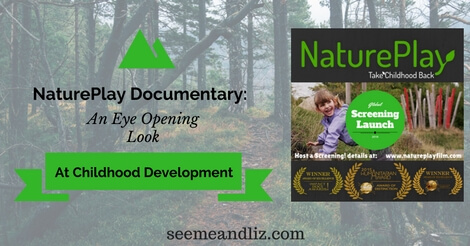 The Nature Play Documentary – What Childhood Should Look Like

I am all about children learning through play.  And on this website you will find that I encourage parents to give their child(ren) the gift of play in many different ways.  Children can learn by playing with toys (some of which are better than others), with everyday objects found around the house (including what’s in the recycle bins) and of course by being outside in nature!

The outdoors is a vast playground for a developing child!  There are so many new things just waiting to be discovered.  Many teachable moments also arise naturally while being outside.

A few weeks ago, I was invited to watch an incredible eye opening documentary called NaturePlay: Take Childhood Back.  I am so happy that Aimie Stilling (American producer/writer) and her husband Daniel Stilling (Danish filmmaker – who happened to be involved in the filming of “The Martian” as the director of photography) contacted me and gave me access to watch Nature Play.

I want to share with you my thoughts about this film and why I think everyone needs to see it.  Unfortunately it won’t be available in DVD form.  The only way you will be able to see it is to arrange a community screening. You can find out more information about this here.  If you are a strong believer in the need for children to play, please try and arrange a community screening with your child’s school administrators, teachers and other parents.

Before I share my thoughts here is a sneak peak of the film for you!  And make sure you read to the end or scroll to the bottom as I had the opportunity to ask Aimie Stilling some questions and have posted her answers for you!

NaturePlay Teaser with Richard Louv from NaturePlay Film on Vimeo.

What caught my attention right away with NaturePlay was the glaring differences between education philosophies in Scandinavia versus North America (in particular the United States).  In the US, education is all about data collection, standardized testing and the infamous Common Core State Standards.  However, parents and professionals are starting to realize that these ideals are failing children.

Childhood should not be about memorization and testing.  It should be about exploration, innovation and time for unstructured free play!  In the US children are spending less and less time outside as many schools are cutting recess in favor of teaching academics so that standardized test scores can be higher. 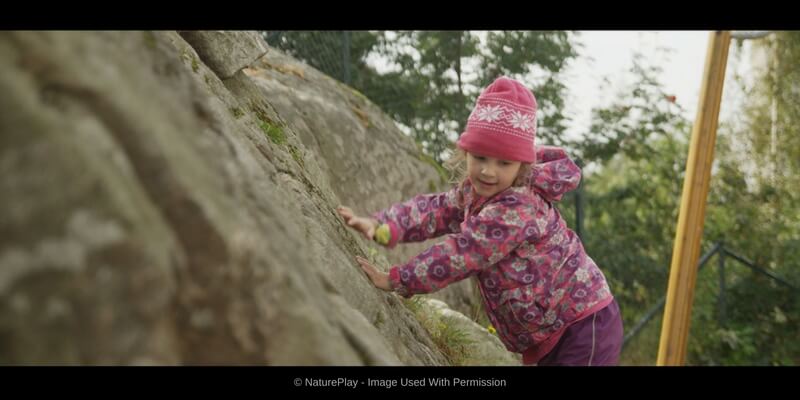 In addition, once children get home from school they are often shuttled from one structured activity to the next and if that isn’t the case there is a good chance they are sitting in front of a screen (TV, iPad, smart phone, video games, etc.).

An Inside Look At The Nature Play Documentary

The film begins with narrator Richard Louv (Author of Last Child in the Woods) reminiscing of a time when children were encouraged to get outside and enjoy nature.  Back then it may have been because children didn’t have access to the things which they do now, but either way, children were urged to play and be outside!  Children learned skills such as problem solving, independence, teamwork, prediction, risk assessment and fine tuning fine and gross motor skills, etc., naturally, through play.

The film then takes us on a journey where we get to hear first hand from American teachers, board members and those advocating for more play time, discuss how modern schooling is failing children.  Then we are taken to Denmark to hear from parents, teachers and other professionals who feel play and unstructured exploration of the outdoors is as important to a child’s development as is food, water and shelter.

The filmmakers show the audience the various forms of schooling in Denmark and all over Scandanavia including an “udeskole” (outdoor school or forest school), adventure playgrounds, natural playgrounds and public schools.

My children are very fortunate to go to a school where they have incorporated a natural playground.  That is a great start in my opinion (We are in Canada – but we have standardized testing here too, luckily not until Grade 3)!  Here are some pictures of the natural play areas at the school my children go to. 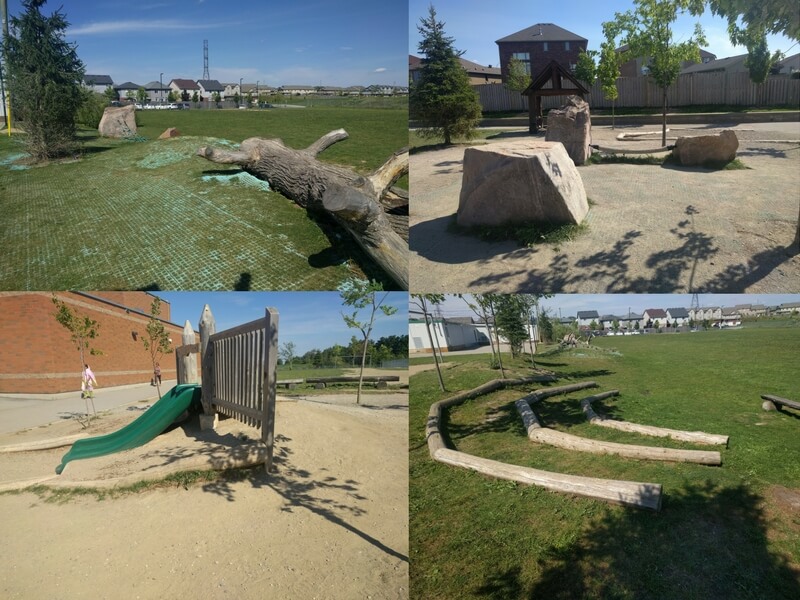 In Denmark “friluftsliv” is an integral part of education.  Friluftsliv is the nordic philosophy of outdoor life.  Literally it means “free air life”.  This Nordic ideology has been around for years and years and exemplifies the idea that being in nature is being at home.

The children in the film are candidly caught climbing trees, crossing streams, playing in the mud, building with a hammer and nails, helping to prepare meals, using a knife to cut a carrot and matches to start a fire.  I didn’t once hear an adult say “watch out, be careful, no or stop”.

This is because risk assessment is part of learning.  Children need to learn on their own and cannot always be protected.  A small injury can teach a good lesson.  These kids are learning the difference between scrapes and cuts and actual danger, something many kids in North America have a hard time distinguishing between because they do not have the same learning opportunities.

In North America play itself is structured.  I remember going to play groups and “play-dates” when my children were young and there would be crafts and organized play activities set up.  Most of the children there were under the age of 4.  All they wanted to do was run around and have a good time. 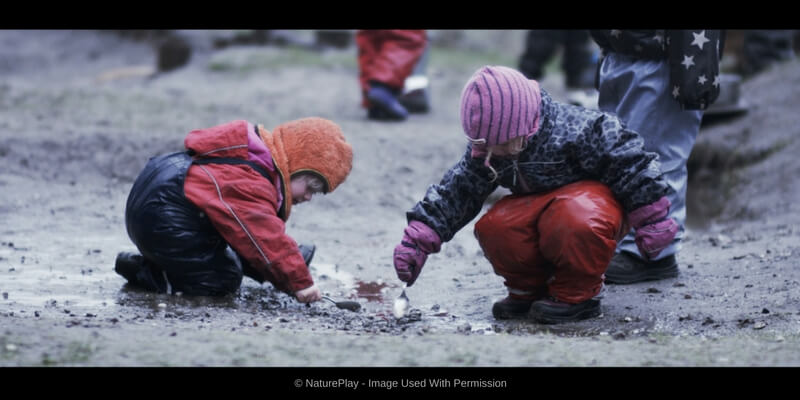 An Interview with Aimie Stilling

The following answers were provided to me by Aimie.

What inspired you to produce this film?

We decided to enroll our daughter in a Danish Forest Kindergarten to develop her Danish language skills and the film grew out of that experience. We made this film while researching the Nordic Model of Education. Exposed to the Scandinavian education/play philosophy we realized it’s uniqueness and success in producing innovative, creative, and healthy adults. Upon arrival back in the USA we were dismayed at the high stakes testing and lack of recess time in most schools. Everywhere we heard about children stressed and hating school, parents desperate. We detoured, exploring both Montessori and forest kindergartens for our daughter at the same time. We realized the benefits of both programs. A parents journey of discovery and the struggle to rescue their child and all children from the horror of a de-­formed education system.

What is the key message you are trying to get across with this film?

What is the best way to get this film in the hands of educators and policy makers?

Mobilize your community to action by hosting a screening of NaturePlay – Take Childhood Back film and invite the Educators and policy makers to attend. Ask them to speak on a panel on education afterwards to spark collaborative discussion on change, especially close to an election! www.natureplayfilm.com

Of those that have seen the film, how has it been received?

Many Universities and Schools in a lot of countries are currently acquiring the film and screenings are being set-up by people, organizations, and conferences. I am quite shocked to hear that every time it is screened powerful things happen in the community where it is seen – Amazing reports of people mobilizing to create new types of schools or creating positive changes for children in existing schools like increased recess, free play access to nature and increased outdoor lesson times. Universities are designing courses around the film and there have been legislative proposals and judicial case successes through a network of Impact Partner involvement. Powerful indeed. The film has been widely accepted internationally, even in China, with it’s censorship and societal controls, has scheduled NaturePlay to air on national TV.  My question is then will the North American Broadcasters step up at MipCom / AFM and allow this to get out in a very big way? 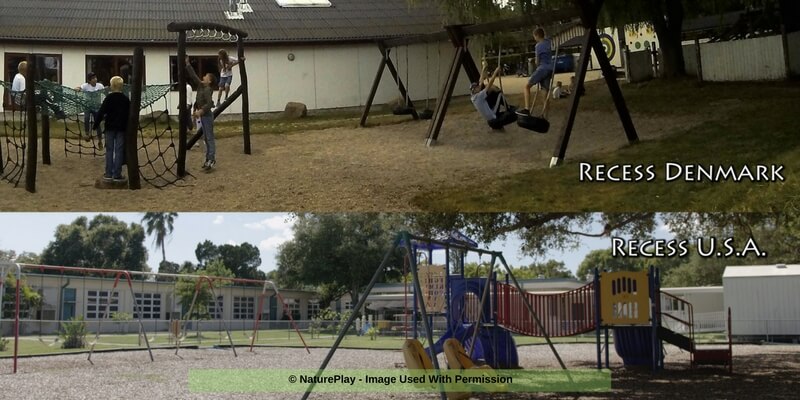 Some ideas that really stood out for me in the Nature Play Documentary are that nature takes many different shapes for children and unlike television, nature doesn’t steal time, it amplifies it.  Nature also inspires creativity yet it can also frighten.

I want to leave you with a quote that was said by Klaus Nedergaard (Manager of Rainbow Adventure Playground) in the film and that is “rules are too rigid, common sense is better” and I couldn’t agree more.  Don’t get me wrong, I do believe children need to learn to follow rules, however, they also need to be given the space to learn independently and make mistakes.  But if our children only learn by following rules and doing what the adults in their lives tell them that they should be doing, how will they ever develop what we know as common sense?  Perhaps this is why common sense no longer seems so common.  Something to think about isn’t it? 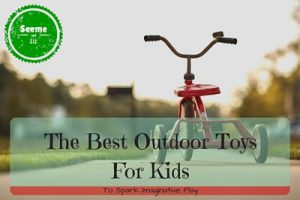 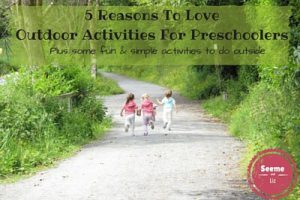