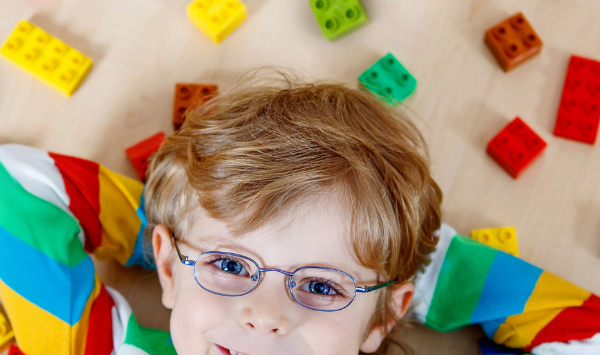 Lego is an all time favorite activity in my house, in fact it has been since my kids were 3 and 5 years old!

Nowadays, you can buy an infinite amount of Lego based on a variety of different themes.

Or you can purchase a mixed bin of Lego bricks and accessories of various colors and sizes.

According to the manufacturer’s specifications, Lego is meant for children over the age of 5 (each set varies with regards to age ranges).

But, my son started asking for Lego at the age of three.

You know your child best, so it is up to you to decide if they are ready for Lego under the age of 5.

There are bigger blocks (e.g. Lego Duplo and Mega Bloks) that are similar to the small Lego blocks but are meant for children under the age of 5.

Both of my children started with the bigger blocks around their 1st birthdays and played with them for quite some time.

Because my husband is a big Lego fan he bought our son his first real Lego set at the age of 3.

My husband did all of the building, but our son was very enthralled watching the whole process!

If you are going to purchase theme based or pre-packaged Lego sets for a young child, be prepared to do most of the building.

They now build all of their sets independently and love coming up with their own creations.

Both of them can build most sets that are labelled 16+, so if your child is an avid Lego fan you don’t necessarily need to follow the age guidelines (especially as they get older and you don’t need to worry about them possibly trying to eat any of the tiny pieces).

They have also followed instructional videos on YouTube to build a mini Oreo dispenser!

You can build just about anything with LEGO!

Click here to find out about my NUMBER ONE recommended toy for play based learning!

The 6 Best Things About Lego Activities For Kids

Lego is great for so many reasons.

And what you and your child can make/build with Lego is only limited to what your imagination will allow.

As I mentioned earlier, you can either purchase Lego sets that come with instructions and you get to build something very specific (e.g. a rocket ship, a fire station, a superhero lair, etc) or you can just get mixed packs of Lego.

While the theme based sets don’t allow for quite as much creativity as having a bin of LEGO of various shapes and sizes, your child can get creative with the final product.

If the set you have makes a spaceship, then your child can have a lot of fun pretending with the spaceship.

Encourage your child to use Lego towards other interests.

Perhaps your child has a rock collection.  Why not build a Lego shelf to display the rocks!

If you started out with themed sets, I want to warn you that it will be nearly impossible to keep the Lego sorted in each theme.

Unless your child is older (probably 10+) and wants to keep the sets together, then it may be possible.

With younger children, they seem to have just as much fun tearing apart a creation as they do building it.

We have a Lego table with bins and every piece of Lego is thrown into a bin.

But I must say, some of the things they have created on their own are pretty imaginative.

The image below shows part of the Lego Christmas Village my son has been creating for the last month, complete with a reindeer pen, curling rink, Christmas tree and train! 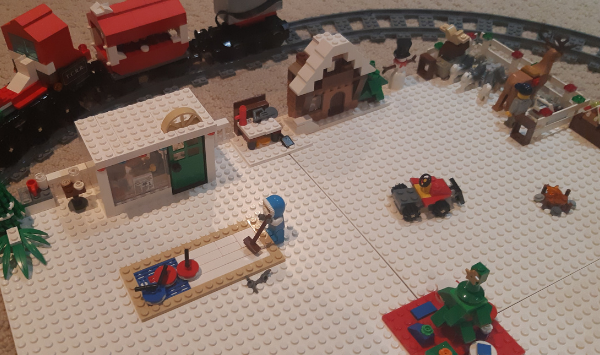 There is a lot of talking that usually happens during any Lego activity.

With the younger children, you can talk about the color of each piece of Lego as well as the texture of the blocks (smooth, bumpy).

You can work on prepositions such as “on, off, under, big, little, up, down”.

With older children more complex sentences will be heard.

As a parent don’t be afraid to use “big” words.

Your child is a smart little cookie and will take in everything they hear.

You can talk about the parts of the car you are building, for example, the wheels go on the axle.

If you are using pre-packaged kits verbalize the instructions to your child so that they learn to follow directions, for example “first find the 10 big red blocks and then find the 4 wheels”.

Following directions is an important part of language development.

In order to expressive oneself, you must understand the words.

There are  many things that can go wrong when trying to build with Lego.  My kids can attest to that.

My son used to get very upset when the Lego creation he was working on broke or when pieces didn’t seem to fit together.

This is a great time to work on patience, persistence and perseverance.

Now at 11 years old he thankfully does not get upset anymore, although from time to time he does still express some frustration.

When he was around 5 he loved to stack the bricks together into towers to make walls.

So each same sized brick is stacked one on top of the other, and then he does that again beside the first stack until he has a wall.

However, a wall built like that tends to fall apart pretty easily.

So I helped him to problem solve and think of a way to prevent this from happening.

I talked to him about “staggering” the bricks so that they are all connected and stuck to one another.

When playing with Lego, a child will encounter many problems.

However, with a bit of creativity and persistence they can be overcome.

It is always so wonderful to see the joyful smile on a child’s face when they are showing you their very own Lego creation.

Whether it is something they came up with and built on their own or followed the instructions of a pre-packaged theme set all on their own.

Either way it is something to be proud of.

Some children may not be interested in Lego because maybe they feel that they aren’t able to build something on their own.

You can show them that it doesn’t matter what they build.  Whatever it is, it will still be a masterpiece and the only way to get better is to practice.

There is really no right or wrong when building with Lego.   Just build and be creative!

My kids love playing with Lego together, however there are often clashes when it comes to deciding what to build and then how to build it.

I stress to my children that it is important to co-operate and take turns.

We talk about all of the things that can be created with Lego and then decide on which one to tackle first.  That is the first hurdle.

Next, they have to decide how it will be built.  Let’s take a house as an example.

My daughter used to always get upset with her brother because he didn’t stagger the bricks to keep them together.

I explained to her that this is something that we need to teach him and that we should each take a turn staggering a block until we have built an entire wall.

Then comes the issue of how many doors and windows the house will have and where to put them.  And finally the roof.

Will it be a flat roof or an angled roof?  If it is angled, how will it be built if we don’t have any “roof” pieces.

As you can see there are many opportunities for teamwork, co-operation and turn taking in any given Lego activity.

If your child doesn’t have any siblings, you (parent or caregiver) can engage in the play and act as a fellow team member.

Lego blocks and their accessories are quite small (hence, why they are not recommended for children under the age of 5).

It can be a challenge to hold a small piece in one hand while using the other hand to attach another piece.

Children need to use different grasp types to build with Lego.

Working on fine motor skills in one environment (e.g. playing with Lego) can transfer to skill development in other areas, for example, writing or opening and closing buttons.

Playing With Lego Is Learning Through Play

A child has no idea how many skills they are learning while playing with a toy as fun as Lego!

What are some of your child’s favorite things to create with these amazing bricks? 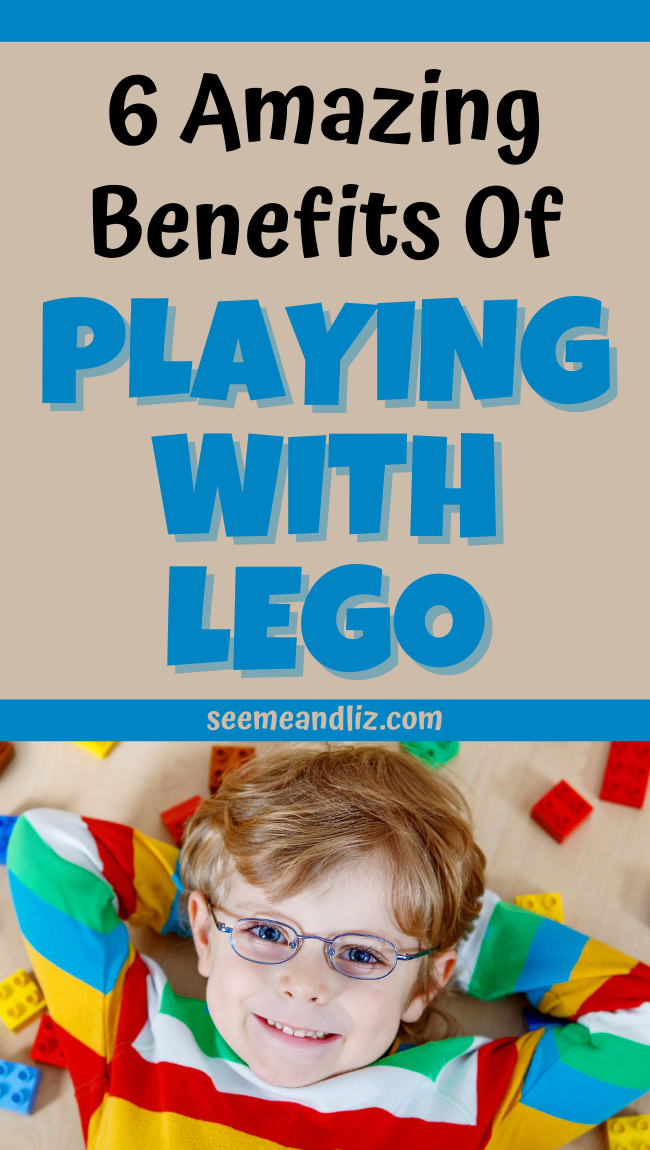 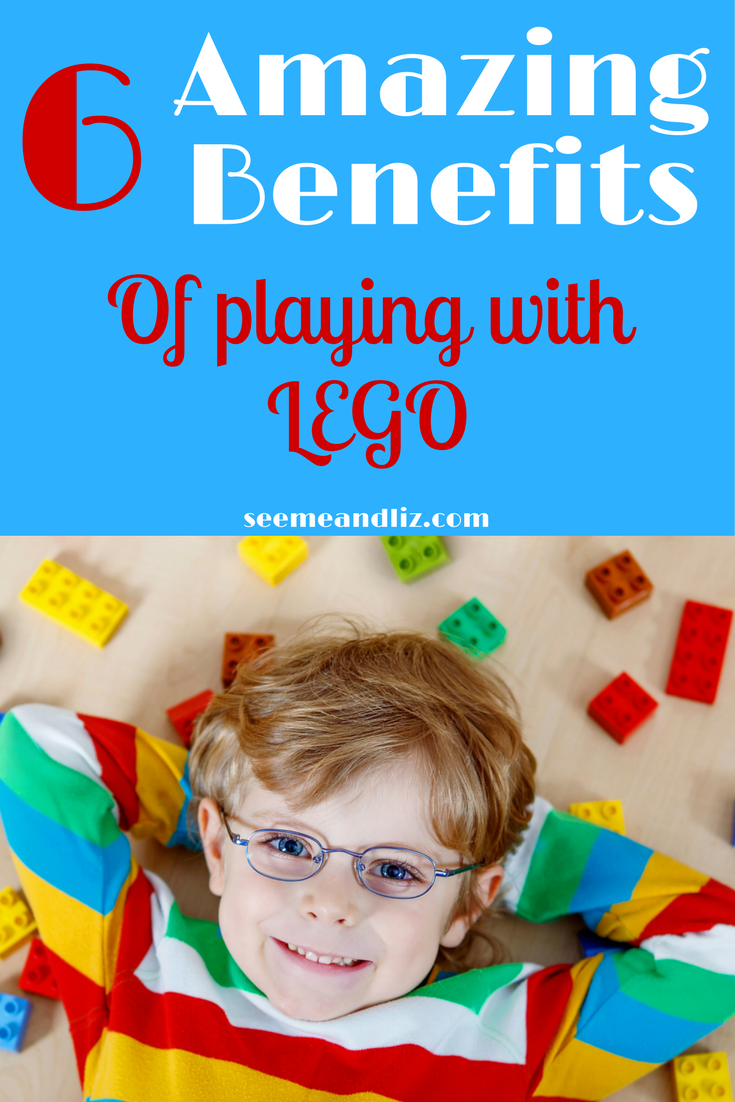