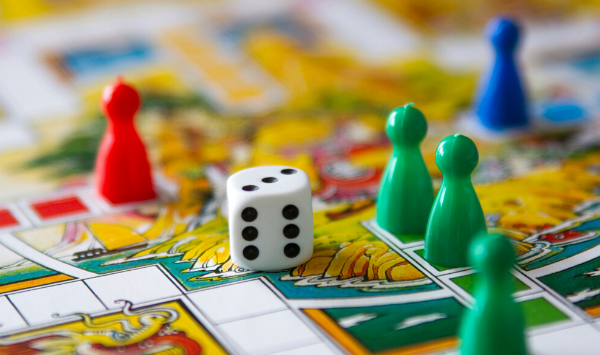 In our family we don’t have set family game nights.

We like to play it by ear and plan them when we are able to fit them in, but we always try to have at least one game night a week.

It’s important to come together as a family, especially as the children get older and are more independent.

This doesn’t have to always mean sitting in front of the TV as a family – but we do have family movie nights as well.

Families have very busy schedules so it is becoming more and more important to set aside time for a fun night or afternoon of family games!

As many of you probably have children from young babies to school age, I wanted to include some “games” for the 1-3 year age group as well.

Family game night games do not need to all be board games, these can be people games as well, especially if your kids are under the age of 5.

In this article I will also talk about the language and learning benefits of some of the games!

I am only discussing about 6 games here, but there are literally thousands of games you can play as a family.

I’m hoping to give you a few simple ideas to get you started.

Jump to the 4-6 year age group

Jump to the 6+ age group

Family Games For 1 to 3 Year Old’s

Children in this age group won’t be able to sit for a board game (if your child does, please let me know what you are doing).

And even if they do, there is a good chance that they will get overwhelmed with the rules of the game (even simple games).

There are however a few great games you can purchase for this age group as well.

This game is usually more fun for the child than the parent, especially when they child is very young.

If your child is under the age of 3 this game is best played with 2 parents/caregivers and the child(ren) – play in teams of 1 parent and 1 child.

It is funny watching young children play hide and seek as they don’t understand taking someone else’s perspective.

You will often see a child hiding in the same spot over and over again, or they will be “hiding” in plain site (because from their perspective if they don’t see the person doing the seeking, then it would mean that person can’t see the person hiding).

Hide and Seek can also be a way for kids to be more physically active.

It can also teach the child to take the perspective of another person.

This is also a great game to work on spatial concepts such as:

This game is better suited for the 18 month-3 year age group, and even then, some children don’t quite get it. 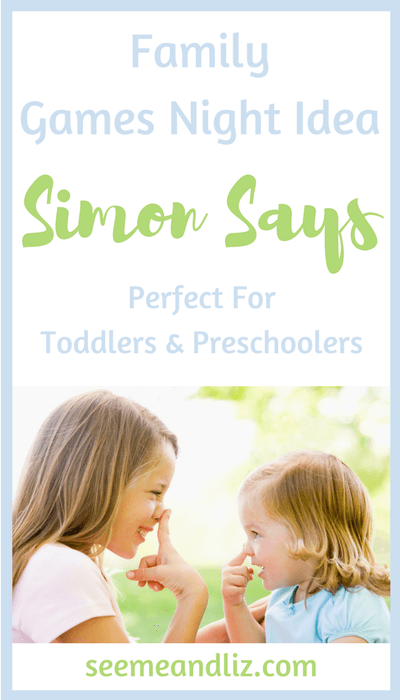 As long as you don’t get hung up on the rules this game can be a lot of fun.

Parent’s and children can take turns stating a command, for example “Simon says touch your nose”.

The real way the game is played is that only instructions starting with “Simon says” are followed.

Those that follow an instruction that don’t start with “Simon says” are out of the game.

This can be a challenge for most children under the age of 3.

With young children simply focus on having them give and follow an instruction.

This does not have to be a tangible item.

It could be something as simple as an “airplane ride” from a parent (pick the child up and fly them like an airplane).

I love Simon says because you can work on following directions with your child as well as having the child learn to give directions.

For young children it can also help teach new vocabulary such as nouns (body parts) and verbs (actions such as touch, kick, spin, point to, etc.).

This is one of my favorite games for young children.

The Tomy Pop Up Pirate game was one of my go to games during my speech therapy sessions with small children.

Make sure the brand is Tomy as there are many knock off ones that will break after a few uses, so spend the few extra dollars on the real thing and it should last years (mine did).

I love this game because you can work on turn taking, colors, counting and sentence building (e.g. “I want the blue sword”, “can I have the green sword?”, “it’s my turn now”, etc.).

Fine motor skills can be worked on via pop up pirate as well.

Pop Up Pirate is very simple to follow and most kids are thrilled when the pirate jumps out of the barrel (although I have seen a few kids who are scared of this when it first happens).

This game is great because there doesn’t have to be a winner or loser.

However, if you decide you want to make it a competitive game you can decide if the winner is the one who gets the pirate to pop up or if that person is the loser.

Pop Up Pirate by Tomy is a great first game to introduce to your family game night games repertoire.

Family Games For 4 to 6 Year Old’s

Pop Up Games for Kids (Pop-O-Matic)

These type of games are a great introduction to rule based games where there is a clear winner.

The original pop up game for kids that I can remember is Trouble.

I still have many wonderful memories of playing this game with my parents when I was a child.

The concept is so simple.

Every player (max of 4 players) chooses a color.

The goal is to get all for of your colored figures home safely.

I also love these games because the die cannot get lost.  It is trapped safely in a bubble.

My kids were not really into games until we got some of these pop up games.

Now our only issue is deciding which one of these games we will play.

These types of games are definitely meant for older children.

We purchased Monsteropoly when our children were about 4 and 6 years old.

My son who was 4 at the time wanted nothing to do with it.

He lasted about 1-2 turns and then had enough.

Once he turned 6 he started to actually enjoy it.

There are many different themed monopoly games for kids.

But, if you want to stick with the original game of Monopoly there is a junior version.

These games are good in that they encourage kids how to play games graciously and it makes them realize that you can’t always be the winner.

As children become more proficient readers, they can fully participate in these games by reading parts of the games (such as the cards that tell you what you need to do).

In our Monsteropoly game there are cards that need to be read when you land on certain spaces.

These cards tell each player what they must do in order to proceed with the game.

My daughter was 8 when she decided she loved reading these cards!

She isn’t a big fan of reading, but when we play this game I think she forgets she is actually reading.

Othello being on this list may come as a surprise to some of you, but it is a hit at my house!

This game is recommended for children ages 8 and older however, my son started play at the age of 6 and loves it!

In fact, he has legitimately beat my husband and I several times.

Since this is a two player game, we either take turns playing or play on teams (boys against girls is usually how it goes for us).

This is a great game to teach children about strategy and thinking/planning ahead.

The object of the game is to capture as many of your opponent’s pieces as possible.

I also love Headbanz Jr. and Operation for the 6+ crowd!

There are so many great family game night games to choose from.

I hope that this article has given you a starting point if you feel at a loss.

We have many more games than the ones I discussed at our house, but if I wrote about all of them I may as well have published this article as an e-book.

Do you do family game nights at your house?

If so what is your families favorite game or games to play? 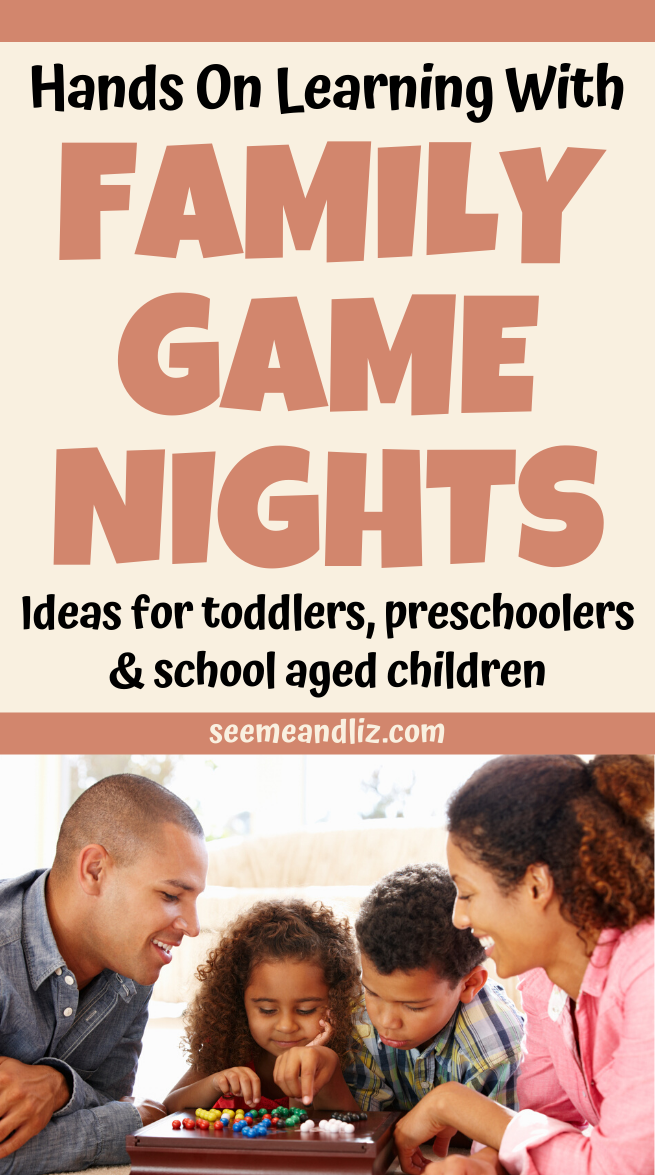 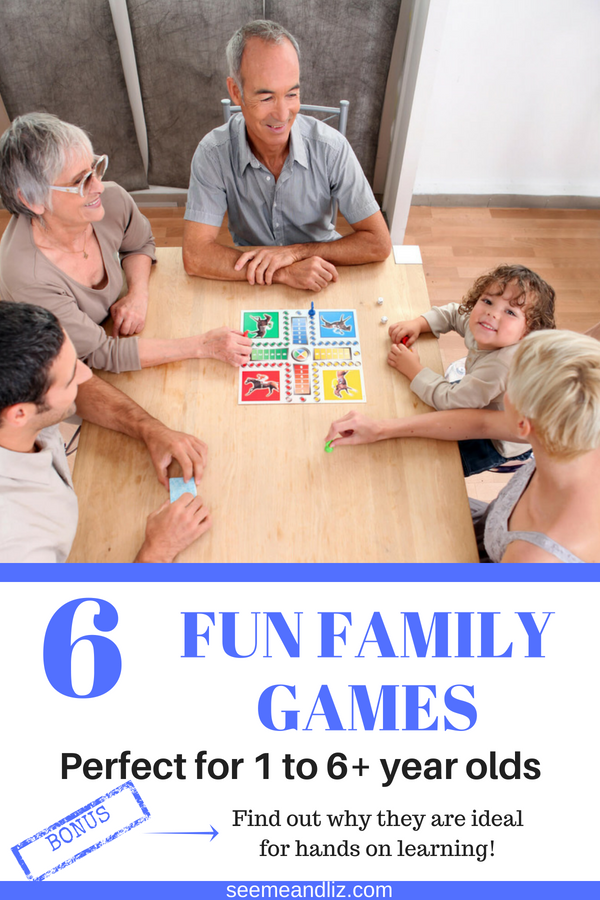