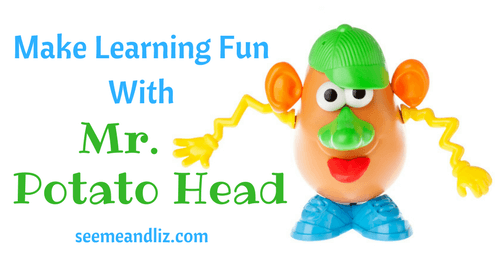 Toddler learning activities can be as simple as playing with Mr. or Mrs. Potato head!

Children learn best through play,so why not offer a toy as versatile as Mr. Potato Head?

Note: This article is intended for parents of children between the ages of 18 and 30 months.  Older children can still play with potato heads and there are additional learning benefits for them as well (far too many to cover in this article).  There are a few tips that I will cover that are meant for children over 30 months.  When this is the case, I will make a note of it.

Did you know that a child’s vocabulary size at the age of two is one of the best predictors of future language and literacy skills in elementary school?

It’s great if your child can recite the alphabet, but he will have plenty of time to learn academic skills (reading, writing, math,etc.).

This is a crucial age to be focusing on your child’s language development.

Here are some areas specific to language and cognitive development that our friend Mr. (and Mrs.) Potato Head can help with:

It is probably pretty obvious that Mr. Potato head is a great toy for teaching body parts.

As your child is putting Mr. Potato head together or taking him apart talk about his arms, hands, feet/shoes, eyes, nose, mouth, ears, stomach, etc.

You can turn it into a fun game (great for one or more children) by placing all of the potato head parts into a bag and have each child take turns pulling one out while naming the part they found.

While playing with the potato head, have him go on adventures and talk about what he is doing.

Some action words you may want to talk about include: walk, break, jump, run, fall, etc.

Did you know that the ability to identify and understand prepositions (especially top, middle and bottom) will help your child with writing skills later on?

Understanding prepositions also helps a child to be able to follow directions.

Some prepositions that you can practice with your child while playing with potato heads include: in, out, on, off, and under.

There are other prepositions such as in front, behind, beside, top, middle, bottom, however these prepositions are a bit more difficult to understand for children in this age range (18 to 30 months).

To work on this, you will need more than one potato head.  If you have several make them look the same except for one part.

For example, one could have a hat on while the other doesn’t.

See if your child can spot the difference.

Keep in mind, understanding same and different is a higher level skill.

This would be too hard for an 18 month old child.  Leave this for children over the age of 3.

This is another activity that is more appropriate for children 30 months and older.

This will work if you have a Mr. and Mrs. Potato head.

Talk to your child about what “he” or “she” is doing.

You can also say things like “My potato head is wearing a hat” or “I have Mr. Potato head”.

On average children start understanding and using the pronouns “he” and “she” between 31 and 34 months of age.

Once the potato head is assembled, your child can practice some functional play skills such as feeding, bathing and putting Mr. potato head to sleep.

Children usually have mastered regular plurals (adding an -s to the end of a word to signify more than one) between 27 and 33 months, although many children are doing this around 24 months.

Irregular plurals take a while longer (e.g. foot vs feet).  My kids are 9 and 11 and now finally seem to have a good grasp on these.

If your child is not using words on a consistent basis, see if she will gesture, sign or vocalize to communicate.

Rather than simply laying all of the pieces out and letting your child play independently, withhold some of the pieces and encourage  your child to communicate her wants through eye contact, gesturing, signing or vocalizing.

Communicating in any form will lead to spoken language (assuming your child does not have a developmental disorder that may prohibit her from talking).

If your child is using only one word to communicate, use Mr. Potato head to work on 2+ word phrases.

For example if your child says “eye” while trying to put the eyes on the potato head, you could repeat and say “eyes on”.

Other Learning Benefits Of Potato Head

All of the pieces you can attach require the use of both hands.

One to hold Mr. Potato Head and the other to carefully push the back of the piece into a small hole.

If all of the potato head pieces are dumped on the floor (which they inevitably will be), your child will have to scan through all of the items to find the one they are looking for (e.g. red hat).

Early scanning skills will help with reading later on!

For some young children, it can be quite tricky to get the parts into and out of the plastic potato.

If this is the case, or you want to add a sensory element to the activity, make your own potato shaped body out of playdoh.

This will make it easier to get those plastic parts in and out!

Or why not use an actual potato.

It can still be an interesting sensory experience with some fine motor skill building too!

Learning Is Fun With Potato Heads!

There are so many different kinds of Mr. Potato heads available.

There is even a Mr. potato head super spud which comes with 3 smaller potato heads.

And then there are all the themed Mr. Potato heads (pirates, Toy Story, Star Wars, etc.)

As you can see, with Mr. Potato Head learning can be a lot of fun! 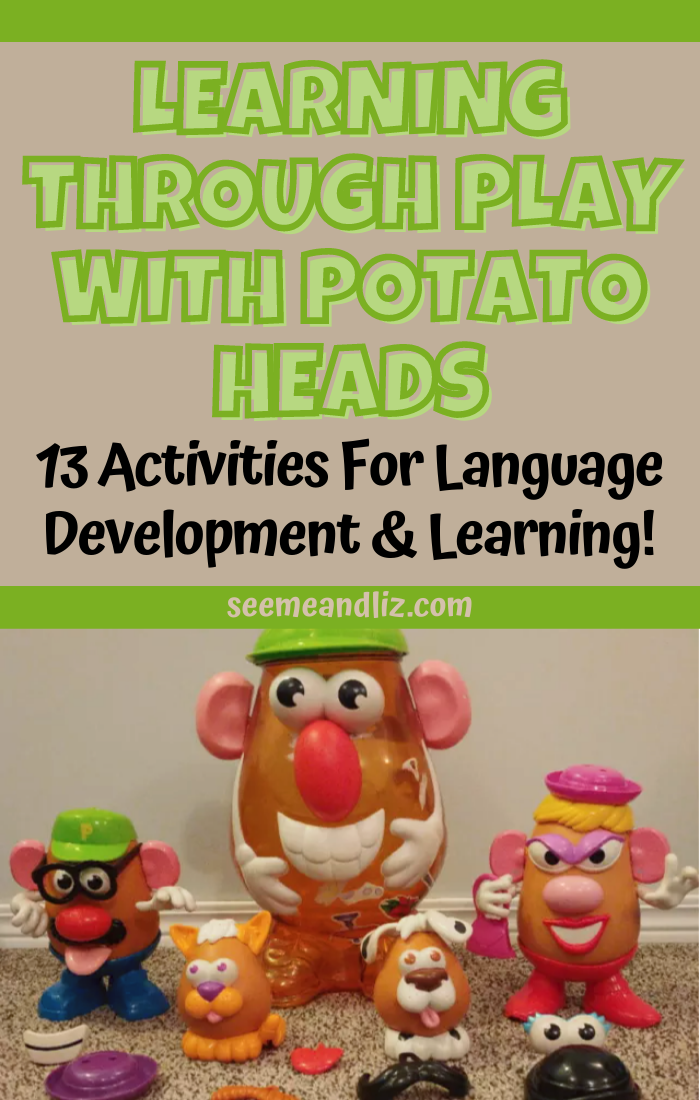 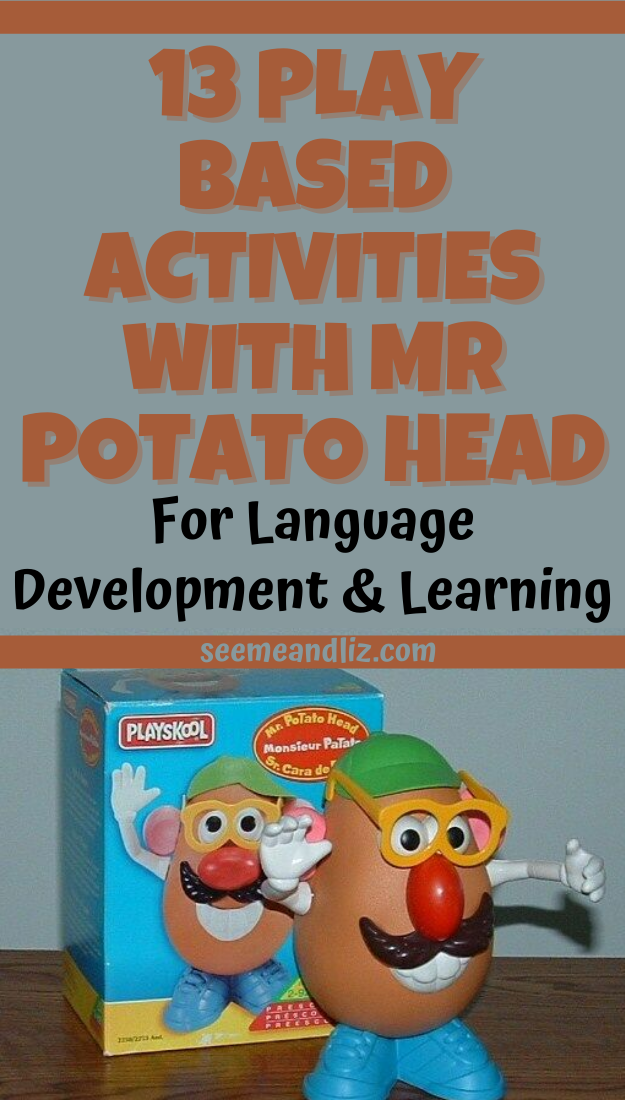 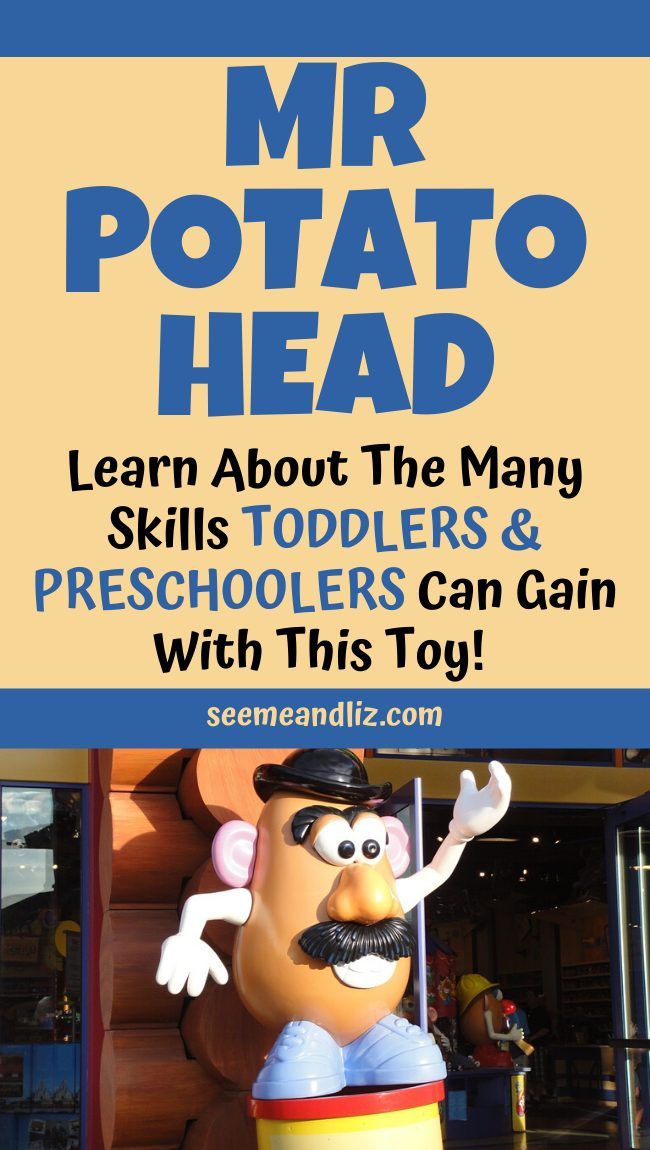