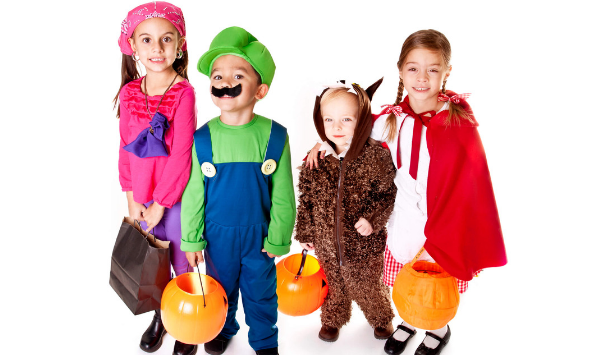 Kids costumes for Halloween are so versatile and many are basically dress up clothes!

Costumes are a great way for kids to really get into pretend play scenarios.

Did you know that there are 100’s of kids dress up clothes that can also be used as Halloween costumes?

I say use them all interchangeably and make sure to have them accessible year round.

The Year Round Developmental Benefits Of Kids Costumes For Halloween

More and more studies are showing that the benefits of all kinds of play, including pretend play, are extremely important to a child’s development in the early years.

Below are just a few ways how kids costumes can be incorporated into pretend play and what the benefits are for your child’s development.

Theory of mind is being about to take another person’s perspective.  Pretend play is one of the best ways that this can develop.

While dressing up, children take on roles of other people that they may be familiar with from real life situations or that they have heard about through books and stories.

My children loved playing “restaurant” with their pretend play kitchen when they were younger!

They also had this great chef’s costume from Melissa and Doug.

Another role play favorite in our house was pretending to be a “doctor” or “dentist”.

Their doctor costume was also from Melissa and Doug.

By taking on these different roles children can develop compassion for others.

They also learn to see things from another person’s perspective.

It can also increase their ability to work and interact with others.

While playing “doctor”  I once heard my daughter say to her younger brother,  “this needle might hurt a bit, but you need it so you can be healthy. I don’t want to hurt you”.

This is probably a given but I still want to point it out.

When children play “dress-up” they are transported into fictional worlds that they have created.

My kids also had some hand me down dinosaur costumes that they would pull out of the dress up closet every once in awhile.

They loved stomping and climbing around our basement pretending to be dinosaurs.

I have heard them talk about what dinosaurs might eat and how big they really were.

This simple pretend play activity has also brought up some good questions.

Like when did dinosaurs become extinct and what does extinct mean.

Children who are encouraged to use their imagination often are more creative adults.

This doesn’t necessarily mean that they will be artists or musicians though.

What it does mean is that their ability to think creatively can allow them to become “out of the box” thinkers.

Allow for Self Expression

Children can pretend to be whoever they want when they put on a costume.

By being someone else they can experiment with new ideas, thoughts and feelings.

This allows them to make decisions about things they may like or dislike about the role they are playing.

For example, your child dresses up as a firefighter.

They get on their ride one fire engine and drive around finding fires to fight.

If they are playing with other children (or his parents, siblings, etc.) a discussion may arise where the dangers of fires are talked about.

Perhaps this makes your child realize that they don’t actually want to be a firefighter in real life because fires are dangerous.

But on the other hand they may decide that it is more important to save others and do it safely as a trained firefighter than it is to be afraid of the fire.

When a parent or caregiver gets involved in the dress up play, these types of questions and answers will come up more often.

Children who are dressed up and engaging in role play typically are not very quiet.

You can hear them talking about what is going on, what needs to be done, what other roles there are in the scenario, what they think a “______” might say, etc.

During dress up pretend play children are learning skills such as:

Problem Solving – e.g. what if the astronaut encounters an alien on her moon landing?

Prediction – e.g. what will happen if the Doctor gives the baby a needle?

Understanding and Using Prepositions – e.g. up, down, in, on, under, beside, in front, behind, etc.

Sometimes the role playing gets so specific that you can hear children changing the tones of their voices depending on their role.

Strengthens The Ability To Self Regulate

Young children struggle with the ability to self regulate their emotions and behavior.

However, dressing up allows them to practice this skill.

Role playing encourages children to take on characteristics of the person their are emulating.

When they do this, children must self regulate (even for a brief time) their actions to fit those of the person they are pretending to be!

One Thing To Note

I do want to point out that you should not feel that you have to buy your child top of the line dress up clothes.

The point is that Halloween Costumes for kids can be used year round.

However, if you are looking for a specific costume, the Melissa and Doug ones are great both from a selection and quality standpoint!


Alternatively, you and your child can get really creative and make costumes from items found around the house.

My kids made surgical masks out of paper towels and pipe cleaners before they had their doctor dress up costume (in the pre-covid days!).

A superhero cape could be made out of an old shirt or pillowcase.

Watch the video below to see just how easily a superhero cape can be made!

Kids costumes for Halloween should be part of a child’s toy box.

The dramatic play ideas your children will come up with are endless!

And they are learning so much while happily playing. 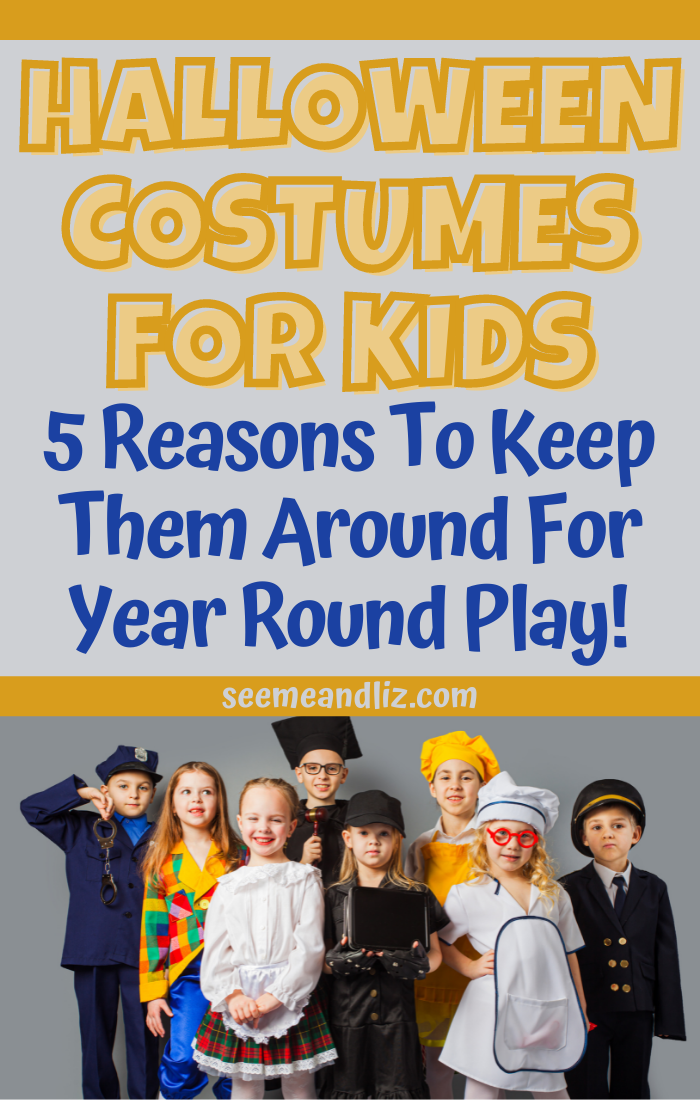 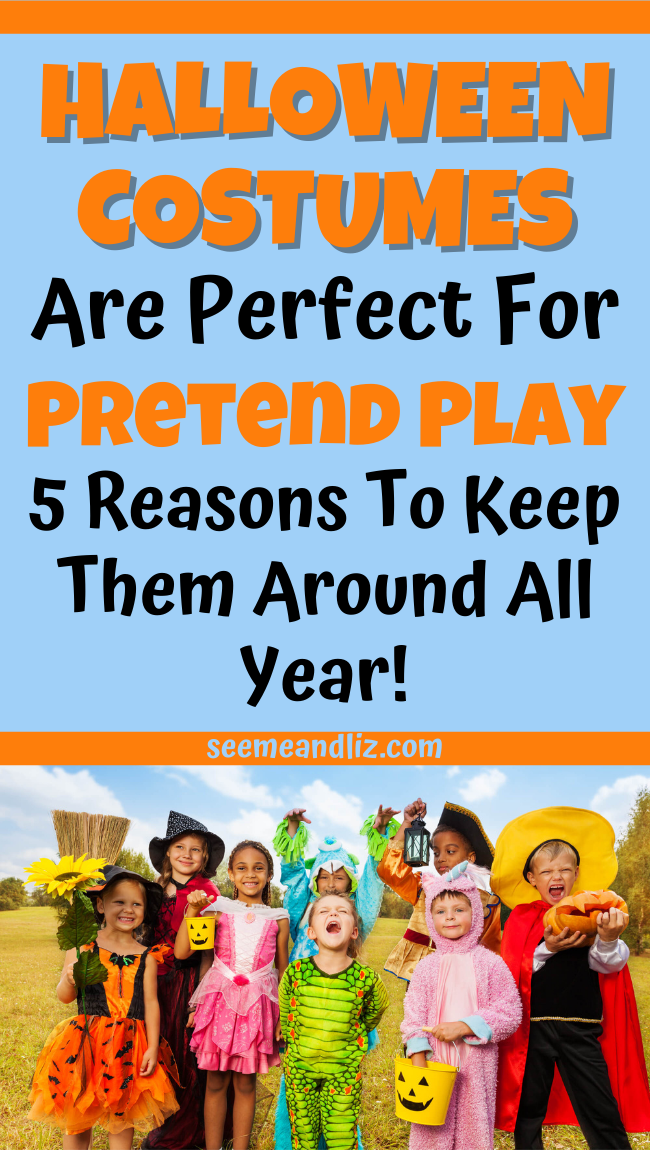 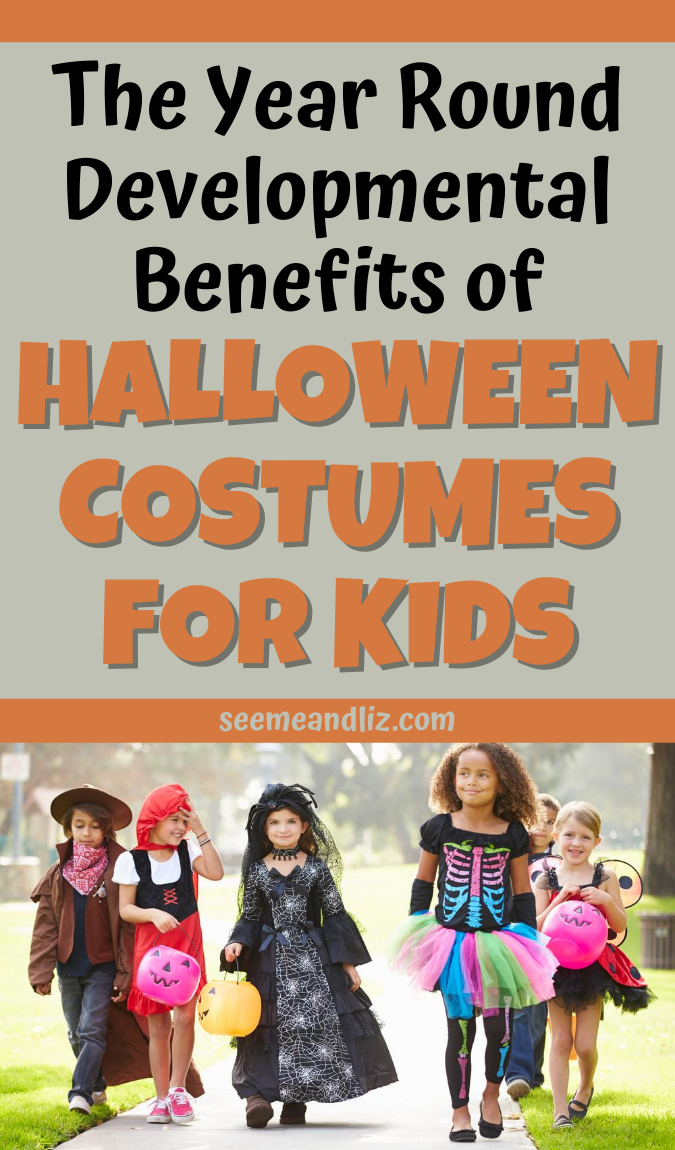