My Child Understands But Doesn’t Speak – Read This! 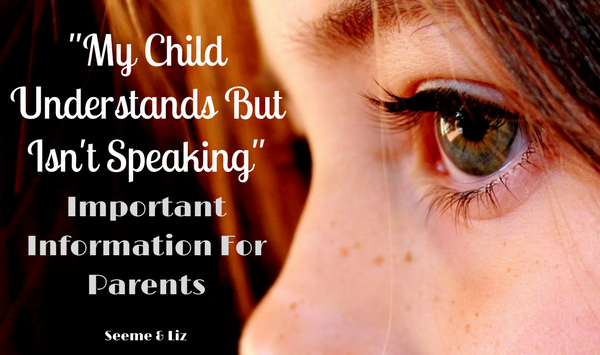 “My child understands but doesn’t speak” is a sentence I often heard from parents who brought their child in to see me for a speech and language assessment.

While in most cases this was true (the child understood at an age appropriate level), there were a few children who actually did not understand what they should have.

There are children who are true “late talkers”, meaning that they are developing as expected in every area except for expressive language (spoken language).

But then there are those who do have difficulty understanding, and have fooled their parents, making them think they actually understand more than they do.

When I say “fooled” I don’t meant that your child is doing this intentionally.

Let me explain how a young child can fool a parent into thinking they understand when they are actually struggling.

If you are interested in learning more about the late talking child, I have a webinar focused specifically on this topic.  Click here for more information!

My Child Understands But Doesn’t Speak

How Some Children “Fool” The Adults Around Them

When a choice is given the child takes one of the items offered, regardless of wanting it or not.

This leads the parent to believe that the child has understood and made a choice.

In order to see if your child can truly make a choice, pay attention to your wording.

Many children will choose the last word in the list of choices.

Therefore, make sure you switch the ordering of the choices.  For example, “do you want yogurt or strawberries?”

The child may say strawberries because it is the last word they heard.

If you said “do you want strawberries or yogurt?” and now they choose yogurt, then that is definitely what is going on.

Try giving a choice between a non preferred item and a preferred one, if your child chooses the preferred item (no matter the order of presentation) then they are able to understand and make a choice.

But make sure the items are presented verbally.

If you show your child 2 items they will easily be able to chose the one they actually want.

In this scenario you are evaluating the ability of your child to understand spoken words.

A child may use joint attention to feign an understanding.

An example is when a parent looks at an object and the child or baby turns to look at the same object.

Children are often assumed to understand more than they do because they are able to use joint attention.

In therapy sessions when I would request a specific item from a child, I would always make sure NOT to look at the one I wanted the child to give to me.

If I said “give me the car” while looking at the car and not the ball, for example, the child would most likely have given me the car because that is the item I was looking at.

Parents often assume that their child is able to follow directions because the child’s teacher has no concerns at school (In this example I am referring to preschoolers or kindergartners).

However, children are quite good at following what the rest of the group is doing.

Let’s say the teacher says “it’s time to clean up and then sit at the carpet”, the child with comprehension (understanding) difficulties will typically wait and see what the others are doing and then follow along.

At home this can happen when a child knows what to expect.

For example, after breakfast they always go upstairs to get dressed.

So when the parent says “go upstairs to get dressed” and the child goes, the parent assumes their child has understood the direction.

Parents also often use gestures and pointing without even realizing it.

So the parent may say “go and get your hat and mitts on” while pointing to their head and hands.

If it’s cold outside, the child will figure out what their parent means.

Here is a great example.  Dad says “throw me the ball” and the child throws the ball.

Of course it seems like the child has just followed a direction.

But, that’s what you do with a ball, you throw it.

If dad would have said “sit on the ball” that might have been a different story. 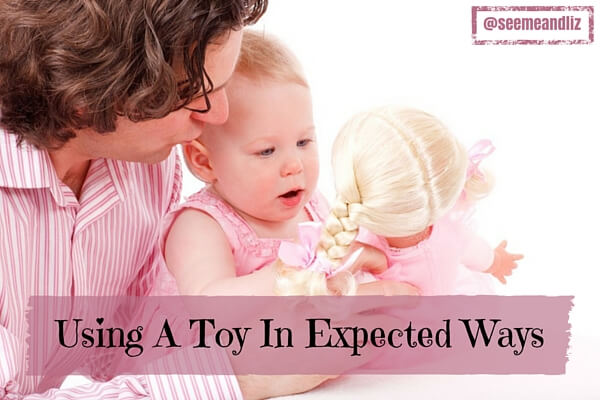 This was one that often came up during my years practicing as a speech-language pathologist.

Many times I would ask a parent about their child’s understanding of early prepositions (in, on, off, out, under) and they would tell me they have no concerns as their child follows instructions containing these words at home.

When I asked for an example I would often get an answer like “he throws the dirty napkins in the garbage when asked”.  This is great, but it’s also what you do with a dirty napkin.

If you said to the child “throw the dirty napkin under the garbage” would the child do that?

In my speech therapy sessions I often had kids follow silly directions or directions with objects such as a box and blocks.

This way the child cannot predict what I might ask them to do.

Another way I would check for comprehension of “in” and “out” was by using a box and blocks or a toy bus (open at the top) with small figurines.

Usually when children are asked to put something “in” or take something “out”, there is only one option and the requested action fits the object being used (e.g. putting something in the garbage that belongs in the garbage).

However, in order to check for true understanding, I would have several blocks around a box as well as 2-3 blocks in the box.

Then I would say to the child “take a block out of the box”.

Many times the child would take all of the blocks that were laying around the box and put them all in.

Parents would stare at me baffled as they thought their child understood these words.

What Does This All Mean?

I am not telling you all of this to scare you or because I think that you should be testing your child.

But, if you have a child over 18 months who is not using words to communicate or using very few words and those words only consist of nouns and a few verbs, don’t assume that your child is understanding everything.

Think of the examples I gave above with regards to your child.

Play some silly games where you ask your child to do something unexpected like “put the dirty napkin under the garbage” and see what happens.

Or try saying “hug the car”, but make sure there is a teddy bear and car near the child.

Keep in mind, that the age of your child will determine whether or not they should be able to follow the directions.

Chances are that when you say “my child understands but doesn’t speak” your child truly does understand, but realize that perhaps there could be more going on.

This is why it is so important to have a speech and language assessment done by a licensed speech-language pathologist rather than just “waiting it out” and hoping for the best.

Be sure to get your child in to see a Speech-Language Pathologist for an assessment if she is over 18 months and is still not using any words (regardless of being able to understand).

In the meantime I highly recommend reading the book “It Takes Two To Talk” by Speech-Language Pathologist Elaine Weitzman.

This book is packed with information including strategies that you can use at home to help your child speak! 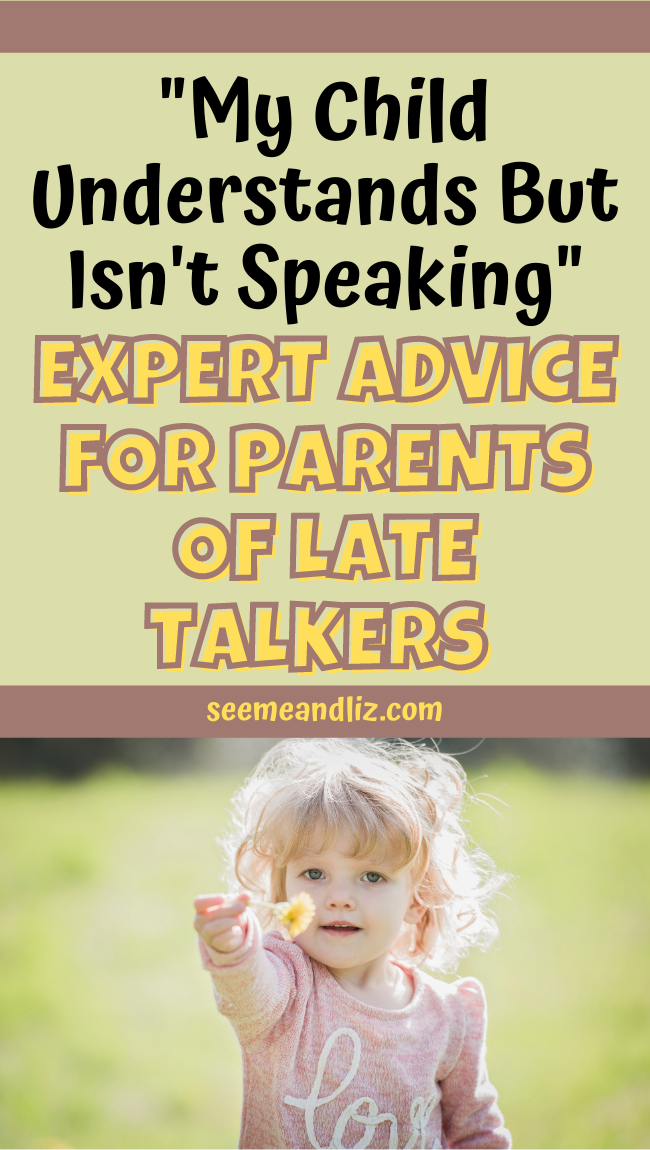 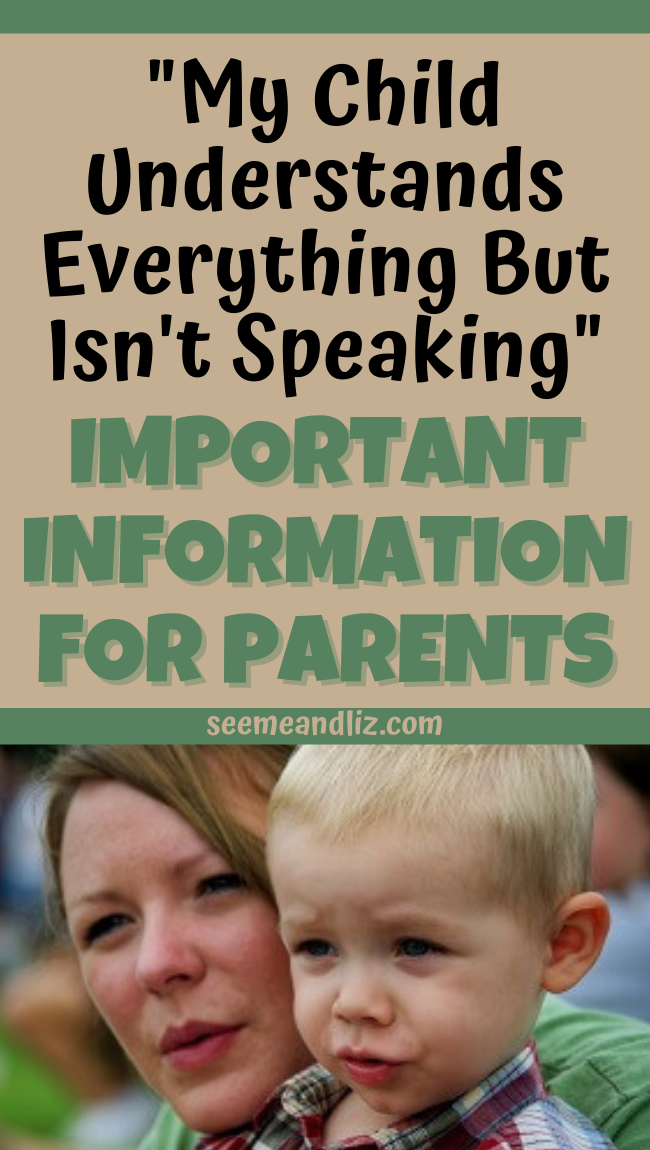 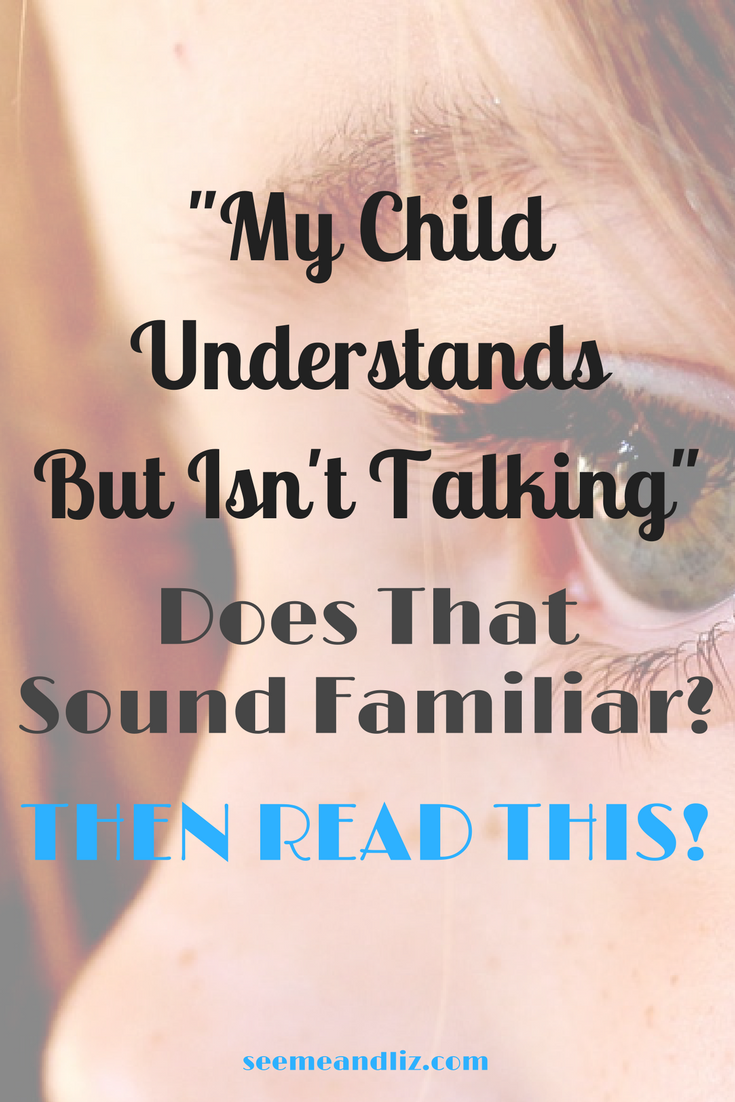